‘La Dotta, La Grassa, La Rossa’. The nickname of Bologna explains a lot about the city. It refers to the first university in the world, the nice culinary and red color of the bricks. Bologna hosts the oldest university in the world and it is home of Bolognese sauce. Almost every building has a portico (porch leading to the entrance of the building). The game map of Assassins Creed is influenced by Bologna. These are several reasons why you should visit Bologna. In this Bologna travel guide, you will find major tourist attractions that you must see, money-saving travel tips that can help you save few bucks, eating suggestions, and more.  Here we go. 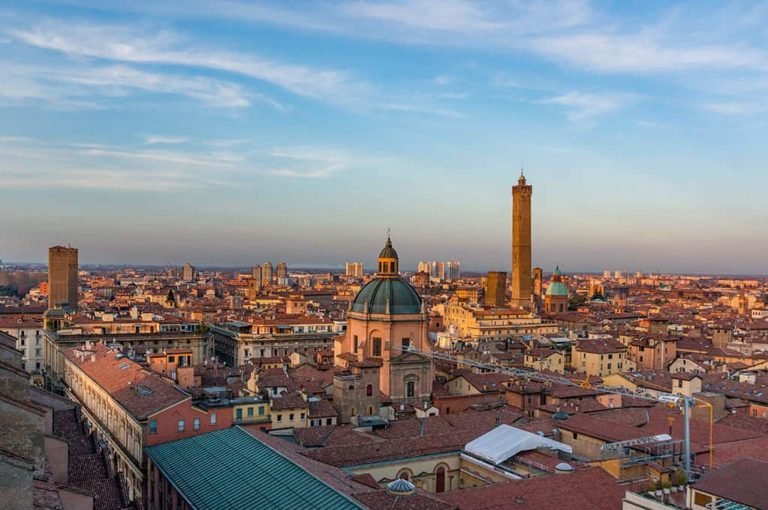 to Twin towers
These towers are the symbol of Bologna. Rich families built towers to show off other rich families in medieval times and this one is the largest (498 steps). Tickets (6€) can be purchased in front of the tower.

Visit Europe’s 6th largest gothic sytle church. You will realize polices stationed in front. Because of potential terrorist attacks in which due to fresco inside Capella Re Magi (3€) that depicts Muhammad being devoured by demons in Hell.

in Piazza Maggiore
Good place to have your morning espresso. In that square you find the fountain of Neptun, another symbol of the city. After that, you can visit the oldest market in Bologna,Quadrilatero, just steps away.

one of the oldest
Anatomical theatre is the place where med students used to watch the cadaver being dissected while lying on the white marble. Statues of Hippocrates and Galenus can be seen on the ceiling and on the wall in this wood interior theater.

Is BolognaWelcome card a good deal?

It has different options (Easy and Plus). Both offers free entrance to some museums. Plus costs 40€ with that you can access panaromic terrace of Basilica San Petronio (more info here). Entrance to basilica is free and accessing terrace costs only 3€. Therefore, this time I would pass unless you want to visit every single museum.

Mid-range budget will get you a room (for two) in a 3star hotel. You can get some decent food and see more museums or attractions.

With a luxury budget, you can stay in a nice 4-star hotel. Well there is not much better than this in Bologna. Eat at a decent restaurant.  Not much to say when you have that amount. The sky is the limit.

With a low budget, you can stay in a mixed dorm and eat a pizza, lasagna or similar and get a chance to see Bologna from above by climbing sister towers.

Mid-range budget will get you a room (for two) in a 3star hotel. You can explore the center of the Italian culinary and see more museums or attractions.

With a luxury budget, you can stay in a nice 4-star hotel. Eat at a decent restaurant. You can also visit muesums. Not much to say when you have that amount. The sky is the limit.

The same thing goes for Bologna. Summer is the peak time. It is packed with tourists and accommodation is more expensive. In winter, the temperature drops to 3-4℃. May would be ideal times to visit. I dropped the yearly climate data for Bologna for your reference.

The airport is just 8 km away from the city center makes it easy to get to.

If you have a company the most convenient way is by taxi: From/to the city center costs around 17€.

By bus: If you prefer the bus then you can pay 6€ for a single ride.

Getting around in Bologna

It is really a compact city and you can get anywhere on foot. I haven’t use the public transport but you can get a single ticket valid for 70min for 1.5€ or day ticket for 5€.

Bologna travel guide: More things to see and do

This church is one of the four churhes (out of seven) that survive to our times in Bologna. That’s why it had a nickname Sette Chiese (seventh church).

Look from the window to the small venice

Apart from the venice like view, there are nice restaurants nearby.

Take a day trip to Venice or Florence

Bologna is just in between two cities making it possible to make a day trip. Besides, trains are cheaper (return ~30€) My guide to Florence can be found here.

Think about it, the name of the city is pronounced million times a day. While Bologna is the home of Bolognese sauce, I found no noticeable difference between other places in the world and Bologna. I guess the secret of making this sauce is transferred well among the chefs. Italians don’t eat spaghetti with this sauce. If you see a place that sells spaghetti bolognese then it is a tourist trap. Run.

What should you try in Bologna?

The main ingredients of tortellini are pork and Parmigiano Reggiano. Production of this cheese is geographically restricted to certain families in Parma and some other parts of Italy. If you are a vegetarian,  with one letter change, look for tortelloni in which pork is substituted with spinach.

Typical lasagna. I found no difference in Bologna.

Well Italians take production of this cheese seriosly. As mentioned above, it is restricted to spesific locations and protected with DOP(d’Origine Protetta) tag. It is aged 12 month minimum. There are 24 month and 36 month aged versions. Create an opportunity to discover different permigiano cheeses. It will worth.

Another geo specific product. I was not huge fan of it but you can try for sure.

Paolo Atti & Figli:Opened in the beginning of 1900s. You can get handmake pasta from them.

Osteria dell’Orsa: Very close proximity to University of Bologna. Expect a line of students which also indicates lower prices. If you want to save few bucks, then osteria’s are the way to go.

Ristorante Donatello: Slightly more expensive comparing to osterias. This restaurant is establish in 1900s and since then ran by the same family. On the walls, there are pictures of important people who tried their food. Remember almost all the restaurants in Italy has a sit-down fee per person (3-4€).

Budget saving option: You can get slice pizza for 2-3€. You can check out ‘Altro?’ But it is not the only one, there are plenty of others. In general, I had plesant experience in Bologna.

Cafe Gamberini it is established in 1907 and still running. Cappucino and croissant = 3€

Gelato (ice cream): ‘Galliera’ is suggested by a local I met while in Bologna and I have no regret. In this Bologna travel guide, I tried to explain major tourist attractions, getting around in Bologna, typical costs and some money saving tips. If you have a specific question you can ask me below. You can also share it on: